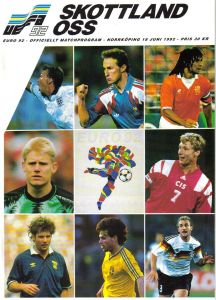 The ’92 programme features Ally McCoist as our cover boy, alongside the likes of David Platt, Ruud Gullit and Rudi Voller. There were only eight finalists back then and by way of clarification, our opponents the OSS were really the CIS!

So when will we see their likes again? Well hopefully in France next June as one of the twenty-four finalists.