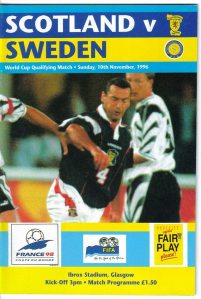 8th April, 2015 is John McGinlay’s 51st birthday, so many happy returns to the man whose winning goal against Sweden at Ibrox Park in November 1996 helped keep Scotland on course for the World Cup finals in France in 1998 – our last major finals before the Gods, fate and the weather turned against us.

The Inverness man’s 13th and final cap came in the 2-0 world cup qualifier victory against Austria at Celtic Park in April 1997.All told, Burnden Park’s last goalscorer played in four world cup qualifiers but, along with the likes of Ally McCoist, did not make it into the squad for France. I know that in respect of McCoist the reason was one of stupidity but I don’t know why McGinlay didn’t make it – injury or loss of form?Anyway, all the best Big Bad John and thanks for helping to get us to those now dim and distant finals.