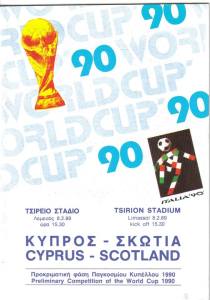 As well as being a dinosaur who struggles with new technology I also don’t like lager. It’s Tartan Special [or McEwan’s Export] for me when I can find pubs in Glasgow and beyond that actually sell the stuff. As such I was almost moved to tears when I recently re-discovered an advert for Tartan Special on the reverse of the Cyprus-Scotland programme from 1989 – the world cup qualifier in which Richard Gough netted the winner about two days into stoppage time.

The advert lists eight boozers in downtown Limassol which sold T.S. but when I holidayed on the island in 2000 it was nowhere to be seen so I contented myself instead with a pilgrimage to the derelict [and soon to be demolished] old GSP Stadium in the divided city of Nicosia.It was in this stadium in December 1968 that a crowd of just under 6,000 witnessed Scotland defeat Cyprus 5-0 in a World Cup qualifying match with the first-half goals coming from Alan Gilzean and Colin Stein [two apiece] and one from Bobby Murdoch. 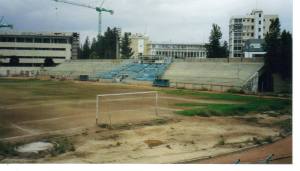 Visiting Cyprus I felt like a time traveller but forget about tourist attractions like the Baths of Aphrodite or the Mosaics of Dionysos – I got a real buzz from walking in the footsteps of Footballing Gods such as Billy Bremner, John Greig, Billy McNeil and Bobby Lennox.