Another Scotland-Brazil match, another hard luck story, and another colourful, evocative image. This time it’s the opening match of the 1998 World Cup Finals in the Stade de France, Paris on 10th June.I was amongst the 80,000 which saw Cesar Sampaio give the defending World Champions the lead after only four minutes. There was no Scotland collapse though and before half-time the pacy Kevin Gallacher won us a penalty which was converted by the posy John Collins.

And then the Football Gods looked down and said this is not acceptable, those Tartan upstarts must be punished – cruelly. I don’t blame Tom Boyd for his own goal which gave the Brazilians a 2-1 victory – we’ve all been guilty of being in the wrong place at the wrong time be it on a football pitch, in a pub or in a lady’s chamber. What’s the French for C’est la vie? 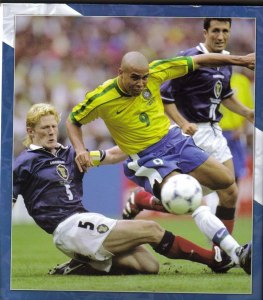 Incidently, the photograph is from the back cover of Kevin Gallacher’s 2006 publication ‘Tartan Turmoil -The fall and rise of Scottish Football.’ It’s an interesting autobiographical look at Scottish Football over a thirty year period. It’s in an attractive, glossy A4 format that doubles as a souvenir scrapbook [with images of match action, match programmes, pennants and portraits] whilst devoting chapters to subjects such as training methods and diet; foreign imports and money; and the growth of the Academies.

Returning to Brazil, the good thing is that we won’t have to face our ‘bogie’ team if, I mean when, we play at next year’s Euro Finals.