Put your shirt on it

One of the many great things about collecting football programmes is that even the adverts help provide a social history/commentary. Over the years these ‘adverts’ have also included the Scotland replica jerseys some of which have become retro-classics whilst others have moved Gok Wan to tears. Here’s a random selection.Our current manager in his Umbro finery is featured on the back page of the Scotland – England, Rous Cup programme from May 1985. The small insert photo meanwhile includes Alan Rough and Davie Cooper as well as four female models – two of which are wearing the girlie-looking yellow away top. Roughie’s yellow goalie jersey passes the ‘macho-test’ however although the socks look a bit suspect.

The front cover of the programme for the Scotland-Bulgaria Euro qualifier from March 1991 gave us two Ally McCoists for the price of one – resplendent in the home and away strips of the time. I’ve always regretted not having the bottle to buy [and wear] that ‘dripping-paint’ belter of an away jersey.Scotland v. Germany, a friendly match from March 1993 features the three amigos of Eoin Jess, Ally McCoist [again] and Stephen Wright in a garish nightmare that includes purple collars, piping and shorts. A straight red card surely for this outfit. 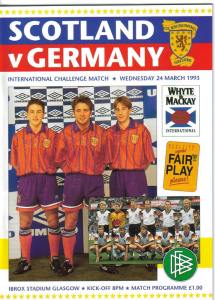 And finally, perhaps it was significant that it appears they couldn’t get any player to be photographed wearing the salmon-pink away jersey which was on the back cover of the programme for the Scotland-Czech Republic Euro qualifier from March 1999. Confession time – I have one of these jerseys pinned to the ceiling of my spare room along with four other Scotland tops which no longer fit!