ST. GEORGE AND THE ANORAK 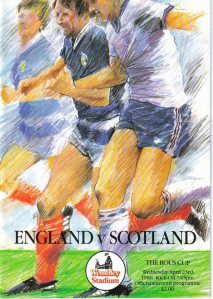 Not many people in Scotland will feel inclined to celebrate the 23rd of April – St.George’s Day. Apparently it’s a big deal for our nearest and dearest south of the border however and not surprisingly the dragonslayer also gets the V.I.P. treatment in Georgia – our potential Euro-qualifying banana skin. That said, Georgia mark the occasion twice a year – on 6 May and 23 November. I think it has something to do with the Gregorian Calendar which I believe is even sexier than the Pirelli one. Also, two public holidays are better than one.

From a football perspective, I was surprised to learn that to date, Scotland appear to have played only one full international match on St. George’s day and that was in 1986 when we lost 1-2 to England at Wembley in the short-lived Rous Cup [Alan Rough’s 53rd and final cap]. That was Scotland match no. 481 with the irony being that match no.1, played over 100 years earlier, took place on St. Andrew’s day – albeit on a cricket ground.

Scotland, be it men, women, professional, amateur, under 23, under 21 etc etc, seem to have a real aversion to playing on the 23rd of April. I went through the list of matches played in Andy Mitchell’s Scotland International Programme Guide [2008] line by line to try and find a notable Scottish victory on that day. I found none. We must all be secret dragon-lovers.So here’s my plea, can someone advise me of something good – from a Scottish perspective – about 23/4 apart from it being Andy Webster’s birthday. It would also be interesting to learn of the dragon’s version of events. For all we know, the winged wonder was minding its own business when that helmeted-hoodie Geo appeared, full of the drink, and with that big feckin lance of his. D.E.B.