Vincent Van Gogh, Alex Van Halen, Eddie Van Halen, Abraham Van Helsing, Commissaris Van der Valk, Hertz Van Rental, Fanny Blankers-Koen and the lucky lad who stuck his finger in a dyke – your boys took one helluva beating – but unfortunately not by the required three goal margin which would have taken Scotland through to the second phase of the World Cup Finals in Argentina.

We all remember Archie Gemmill’s wondergoal in the Estadio San Martin, Mendoza but I had to consult the reference book to remind me of how the overall match played out and then the memories came flooding back. When Robbie Rensenbrink gave the Netherlands the lead from the penalty spot after 34 minutes we all thought -‘Here we go again and how big is this humping going to be?’ And then Kenny Dalglish equalised a minute before half-time and we contented ourselves as Scotland at least appeared to be ‘making a game of it’. One minute into the second half and Scotland are 2-1 in front thanks to an Archie Gemmill penalty. There is a stirring in my loins.

When the wondergoal arrived in the 68th minute it was multiple orgasms all round. Scotland [now 3-1 up] were in dreamland as I danced on the settee and my Mum shouted at me that the furniture underfoot was not yet paid for. All of THREE MINUTES later however Johnny Rep hit a shot from about 35 yards out which flew past Alan Rough and hit both the back of the net and my goollies simultaneously. There were still 19 minutes remaining but the Dutch had wised up and Scotland were unable to get a fourth goal that just might have precipated panic and driven the ghost of Van Gogh to cut off his other ear. 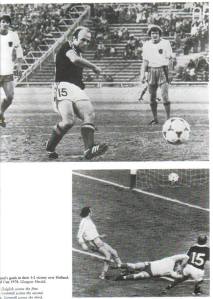 So it was not to be and although in subsequent years I had many exciting times ‘cavorting about’ on that settee with my girlfriend they never got anywhere near the level of excitement of those three minutes experienced on 11th June 1978. As for the attached images the photographs are from Kevin McCarra’s 1984 book- ‘Scottish Football – A Pictorial History’. The front cover features Gemmill in clenched-fist, celebratory mode just after he had put Scotland 3-1 in front. The black and white photos show Archie slotting home his penalty and chipping in the wondergoal.Meanwhile the Daily Record headline of the time says- ‘ The only way to go – Scots win back their pride’ – before going on to mention that Scotland also had two goals chopped off [Tom Forsyth and Kenny Dalglish] whilst a Bruce Rioch header had hit the bar. Wha’s like us, indeed?