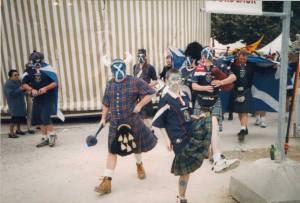 There was a shot in the Evening Times of Kingston Bridge in Glasgow at 5pm, which normally has around two thousand cars a minute hurtlin across it durin rush hour, but as Scotland and Brazil were about to kick off the 1998 world cup in the Stade de France in Paris it was completely empty. There was not a single vehicle or human being in sight, nothin moved, it was as if the world in Scotland stood still.

I had watched the game on the big screen at the Hote de Ville (town hall) in Paris with my 11 year old son Jordan, my brother David and several friends, and two of my outstanding memories of that day were the sound of John Collins’ penalty and the soakin wetness of the final whistle. When Collins slotted the penalty home to equalise, there was an incredible sound, apart from the huge cheer, I’d never heard before or since; it was the sound of thousands of beer, whisky and wine bottles and glasses, bein dropped on the ground or accidentally thrown in the air as the majority of the crowd leapt up in a great outpourin of joy and threw their arms wide ready to hug each other in celebration, before comin crashin and smashin back down to earth. It was an incredible, indescribable sound, like an elongated crrrrsssshhhmasshhhh (telt ye – indescribable). Oh how we cheered and danced (makn sure not to fall on the broken glass) and sang and hugged and gret

Of course it was short lived as we were defeated when the ball went in off Tommy Boyd’s shoulder to put them 2-1 up. As soon as the final whistle sounded the skies, which had previously been bright blue, immediately turned black, there was a huge clap of thunder and an eruption of torrential rain that soaked us through to the skin within minutes. It was as if all the heavens were cryin for us sufferin another inglorious defeat. But never mind, it was still a wonderful adventure as it was off to Bordeaux the next day where we met up with another of my brother’s, John, and more friends in preparation to take on Norway (We’re the famous tartan army and we’re here to save the whale – save the whale, save the whale…).

As usual we never made it past the first round but we all thought we’d have another chance in two years time at the Euros, then the Mondial, then the Euros, then the mondial. I’m so glad I decided to take Jordan with me on that wonderful adventure and not wait until the next one when he would have been a teeager because as we all know there hasn’t been a next one. There are two whole generations of Scots in the world who have never experienced what Jordan and I experienced. Here’s hopin wee Gordon and the boys provide that chance for them and us veterans next year. Ye never Know we might even make it to the next round.