A Wee Pub In Arcachon

I know it’s still a couple of months away, but with the Germany and Poland home ties next up, with Georgia away in between, I can’t help but get excited about the prospect of a good result in each game and what that might lead to – hopefully a place in France 2016. There might be a hermit living in a cave on Pluto just about to be discovered by NASA’s latest mission who doesn’t know that our last proper finals appearance was in France 98, but we all know and for some that seems auspicious. I personally don’t go for auspicious dates or suspicious signs or the planets being in alignment, I am fully aware that all we need is good results to get us there. I want to experience that festival again.

I know that there’s a lot of money and corruption in football and there are complaints that the fans have been forgotten about; and that may be true in the upper echelons of the game and the businesses that sponsor it, but the fans haven’t forgotten about the fans. The other fans (as well as our own) is really what makes the finals so fantastic. When I think back on France 98 I don’t actually remember much about what happened in the games, I remember key points, like Collins’ penalty against Brazil, Boyd’s own goal in the same game, and Burley’s brilliant lob against Norway in Bordeaux. But what I remember more are the celebrations, the before and after game parties with the Brazilians, the Norwegians, The French, even a few Chileans and of course my fellow Scots. 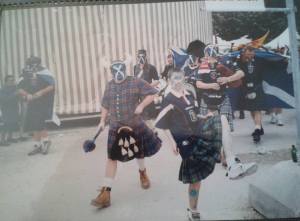 I was in Paris for the Brazil game with my son Jordan, who was 11 years old at the time, and my brother David, then we met up with another brother, John, in a wee town called Ares for a few days camping and relaxing before moving onto Arcachon, where we would be based for our trips into Bordeaux. My abiding memory from that is not Burley’s goal, or even the celebration in front of the big screen on the banks of the Gironde, it’s of arriving back at Arcachon and going into the wee pub/restaurant next to the station, as we did each night and watching my wee 11 year old boy standing on a table in the middle of the pub, megaphone in hand, leading the Tartan Army in a rendition of ‘Everywhere We Go’. After the song finished he went to get down off the table but the guy who owned the megaphone, Ian from Inverness, told him to stay there, took the megaphone and started singing, “One Jordan Nelson, there’s only one Jordan Nelson.” As Jordan was the youngest Scot there everyone had got to know him, even the 82 year father of the French owner was singing along as everyone, Scots and French joined in. What a fantastic memory for me.

I want to go back there with Jordan as a 29 year old as having the 11 year old version with me curtailed the swally (but of course it means I can remember most of what happened this time). So bring on the Germans and The Poles.