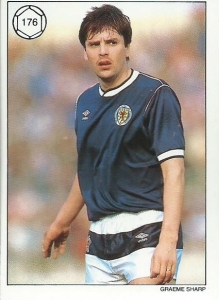 Collectors are generally a sad lot, take my fellow Bullshitter Robert Marshall; the article he wrote about the World Cup Draw was his usual clever, funny self. However, that’s not the sad thing. If you look at the article there’s a photo of a card that says Russia 2018. That’s actually a free drinks voucher; that instead of using, Robert kept as a souvenir of the day and but still bought beers at £4.50 a throw. Sad, sad man.
However, this is not about his collecting it’s about mine as it’s a wee while since I used a football card to tell a story. So here it is, Graeme Sharp from the Topps 1988 Saint & Greavsie set.The story of Graeme Sharp, really is the story of many a Scotland striker; to be found wanting. There are very few over the years who have excelled on the international front since the eighties perhaps Mo Johnston, Ally McCoist and Kenny Miller are the only ones with any real goals return. Falling by the wayside around the time of Sharp would be Stevie Archibald, David Speedie, John Spencer, Gordon Durie, Brian McClair and Charlie Nicholas among others.
Like Sharp, some were really good club players in English First Division but couldn’t cut it on the International front. Graeme’s goal average for Everton is about 1 in every three games scoring 111 League goals in total; for Scotland it was 1 in 12.
Graeme is one of only three Scottish players to have won the Goal of the Season award since it was first gifted in the early Seventies, having won it with a peach of a goal against Liverpool in ’84-’85.
The other Scots to win it are Archie Gemmill in 1977-78; but not for that goal but for another outstanding one in the same season for Nottingham Forest. Kenny Dalglish probably could have won it most seasons, such was his plethora of great goals for Liverpool and yet his is for a Scotland goal. In 1982-83 when he scored that wonder goal against Belgium in the Heysel Stadium of all places.
It was Jock Stein that gave Graeme his first cap in a World Cup Qualifier against Iceland in Reykjavik, which Scotland crucially won in the last few minutes with Jim Bett’s only goal for Scotland (see the Ten One Goal Wonders posted on Facebook June 27th for more details). Fellow Evertonian Andy Gray started upfront alongside Graeme in what was to be his last game for Scotland.
Jock gave the nod to Graeme to start against Wales alongside David Speedie on that fateful night that Jock would pass away.
With Alex Ferguson taking over, Graeme would be sidelined for the play-offs against Australia with Frank McAvennie making his short lived but crucial appearances on the International scene. A couple starts in winning friendlies against Israel and Romania came and went without Sharp opening his goal account.
By the time of the World Cup it was quite clear; we didn’t have an effective striker in place with Maurice Johnston having been left out due to a falling out with Fergie and Kenny Dalglish withdrawing, Charlie Nicholas and Stevie Archibald had both been given their chances in the opening games but both were found wanting and so Fergie turned to Sharp to start against Uruguay and the rest as they say is Misery.
Andy Roxburgh would give Sharp a couple of more chances but with the rise of Ally McCoist and the reinstatement of Mo Jo as first choice strikers, it would mean his time was over. It is ironic that his only Scotland goal came in his final game a 1-1 friendly draw with Malta in Valletta. If Graeme was around today he probably would be our first choice striker but probably wouldn’t be good enough for Everton and no doubt would playing in the lower echelons of the Premiership or indeed in the Championship.
Oh for an International Class Striker!As for the card set, there was quite a few Scotland players in the set which was made up of club cards as well as separate Internationals ones. Among the Scotland ones were; Strachan, Gillespie, McGhee, Malpas, Leighton, McClair, Miller, McLeish, Collins, Sharp, Nicholas, McCoist, Durrant and Sturrock mostly all wearing those namby pamby shorts of the time.