When Ally Came in from the Cold 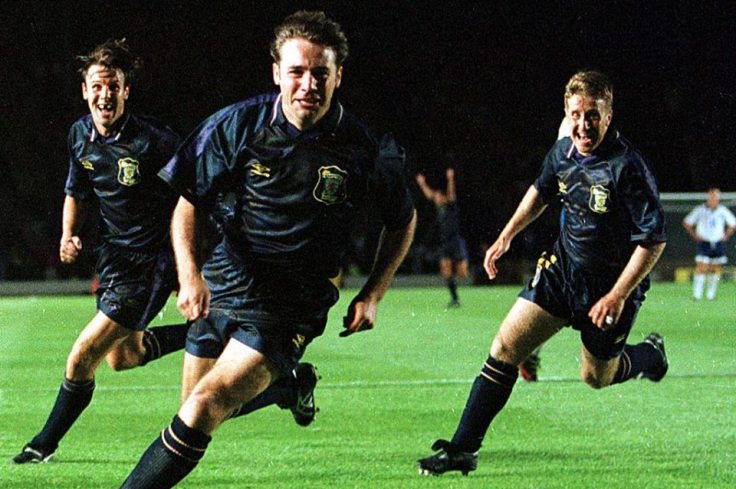 Sometimes you see a photo and you just love the sheer joy portrayed in it. Of course, this is Ally McCoist just after scoring and there will be hundreds of photos of him with that exuberant smile but this one would have been a bit more special.
To tell the whole story, you have to go back over two years beforehand to April 28th, 1993 and a 5 nil defeat to Portugal in Lisbon in a World Cup Qualifier. Scotland had lost to Switzerland away from home and drawn with Portugal at Ibrox; a poor start to the campaign for USA ’94. We would finish fourth with Italy and Switzerland going through to the finals.
At the heart of the Scotland team that night were five Rangers players; Andy Goram, Richard Gough, David McPherson, Stuart McCall and Ally McCoist. Although, Andy Roxburgh would only have three more games in charge of Scotland, he never played any of the five again. He never really ahd any choice as Ally in attempting to score had been calttered by a Portuguese defender and had his leg broken. For Gough and David McPherson it meant the end of their Scotland careers, McCall and Goram would be reinstated quite quickly under Craig Brown but for Ally it would take a long time to put the Dark Blue of Scotland on again.  Of course as one player goes out, another comes in and Colin Hendry was one of the players that would make his debut in the very next game.
So let’s skip forward over two years to August 16th, 1995. Scotland have had a very good start to their Euro Qualifiers for 1996. We have despatched Finland, Faroes and San Marino without any major hitches, we have drawn home and away against Russia and our only reverse was against Greece losing 1-0 to a penalty in Athens. In the meantime McCoist has not had the greatest of times after recovering from his leg break, other injuries meant he had missed a lot of football.
If we beat Greece, then the finish line in sight with games at home against Finland and San Marino to come. The Greeks had already been beaten by Russia and Finland, so this was to be their last chance to qualify but also for Scotland there was the possibility of having to play in a play-off and winning against Greece would count towards avoiding that.
For 71 minutes Scotland’s forward line of Darren Jackson and Duncan Shearer have been unable to pierce the sturdy Greek defence, Craig Brown decides it’s time for Ally to make his International return and also brings on John Robertson. Within a minute, John Collins crosses over and Ally nips in to place a perfect header in the far corner.
In the photo, there’s the joyful McCoist, toothless Craig Burley and John Robertson all almost choreographed in their movements, although I think Colin Calderwood in the background should be substituted as he appears to have only one leg. What you don’t see is Ally jumping over the advertising hoard, running around the goal and jumping another hoarding before stopping to celebrate. John Robertson has followed him off and on the pitch to get a hold of him. Great times.
As for Ally the story didn’t finish there, Craig Brown would use him as a substitute over the next few months and he managed to score against San Marino in another qualifier in a 5 nil rout at Hampden. Ally would be made Captain of the team for his 50th cap in a home friendly, in which of course he would score the only goal. Typical Ally.
So onto Euro ’96 and Ally would come on as a sub against England at Wembley but enough said of that, as Ally would start against Switzerland in what was to be our final game of the tournament. Ally was of course to score the only goal with a great drive from the edge of the box but alas it was not to be enough. Ally played in some of the qualifying games for France ’98 and there are plenty of people who feel he should’ve been part of the squad for that year’s finals and with the likes of Simon Donnelly getting there, perhaps there is a case to be heard. Indeed his final games would be in the campaign for the 2000 Euros in . . . wherever it was, we never got there so it’s not that important.
So here’s to Ally and here’s hoping we get to see a few photos like this one in the next few months of other Scotland strikers.