Peter Cormack will be 69 on July 17th. It’s fair to say that Peter’s Scotland career never really reached the heights that was expected of him. Peter had flourished under Jock Stein at Hibernian as a teenager and indeed he would make his Scotland debut at the age of 19.

This was a pre-World Cup warm up for Brazil and show were such players as Jairzinho, Gerson and Pele. Stevie Chalmers of Celtic put Scotland ahead in the first minute but Brazil equalised through Servilio in the 16th minute and the game ended 1-1.

Surprisingly it would be a couple of years before Peter would play again for Scotland coming on as a sub with 3 minutes to go in a 1-0 defeat to Denmark. However, a year later things pick up again as Peter plays two games in a row. The first in September 1969, the Republic of Ireland game at Dalymount Park which I mentioned the other day.

He is then picked for the World Cup Qualifier against West Germany. At this point Scotland were still very much in the hunt for a place in Mexico and any kind of result against the Germans would put Scotland in a good position going into their last game against Austria.

Scotland got off to a great start with Jimmy Johnstone scoring in only three minutes, however the Germans equalised just before half time and then went into the lead in 60 minutes. Alan Gilzean would equalise four minutes later but with only nine minutes to go a final German gaol broke Scottish hearts. It was shortly after this that Tommy Gemmell went on the rampage having being hacked down by Helmut Haller; Tommy decided to take full blooded revenge and whacked Haller a cracker. Tommy became only the fourth Scotland players to be sent off and the third Celtic player to do so on National duty with Bertie Auld and Pat Crerand being his predecessors.

Scotland lost the final World Cup Qualifier against Austria in Vienna with Peter missing out but who knows what would have happened had we drawn in Hamburg but isn’t that always the way?

As for Peter, after another period of absence would see him come on as a sub, again against Denmark in November 1970 in a Euro qualifier. This would be his first game as a Nottingham Forest player. Scotland won one nil, thanks to a John O’Hare goal

1971 would Peter’s best year for representing Scotland as he would win his final four caps; mind you it wasn’t a great year for Scotland as their playing record would read P10 W2 D1 L7 F5 A14.

Peter would play in defeats to Portugal, England and Denmark and a nil nil draw against Wales. These results would see the ending of Bobby Brown’s reign as Scottish manager and the beginning of Tommy Docherty’s. In fact, the two Scotland wins would be under Tommy and without Peter. Docherty would bring Peter on as a late sub against the Netherlands in Amsterdam in December ’71 and that would be it for Peter . . . well almost.

Peter would become a Liverpool player in 1972 and would be a pivotal part of their season ’72-’73 Championship and UEFA Cup winning team but there would be no Scotland recall for him that year. However, despite not having played for Scotland since 1971 Peter was chosen as part of the 22 players that travelled to Germany for the 1974 World Cup. It is strange that Scotland played six games prior to the World Cup that year and Willie Ormond chose not to play him but still took him to Germany as part of the squad.

That was it for Peter and Scotland, although his international record was pretty poor as Scotland would only win once with Peter involved and even then the goal had been scored long before he came on.

Happy Birthday Peter and all the best. I do wonder, do you still have those white flares and polka dotted high heels? 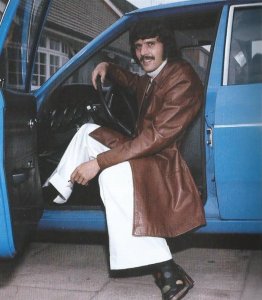