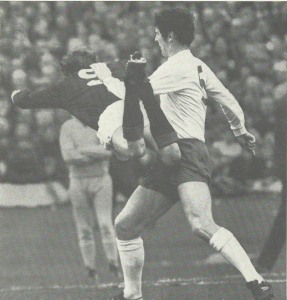 . . . no it’s a dive according to German referee Schulenberg despite the outcries of 137,000 Scottish fans at Hampden and goodness knows how many watching at home that year. The photo is taken from the Daily Record Book of Scottish Football that I mentioned the other day. Colin Stein has just been upended in spectacular fashion by Brian Labone. Certainly in the article in the book it suggests it was a stonewaller but perhaps Colin has over-egged the pudding with the perfection of the dive something I’m sure many a player would be proud of today.
As Scotland had failed to reach that summer’s World Cup in Mexico, it was quite a young and mostly inexperienced team that faced England that day. Celtic’s David Hay, Kilmarnock’s Billy Dickson, Derby’s John O’Hare and Coventry’s Willie Carr had all been given their debuts in the opening game of that seasons Home Internationals against Northern Ireland a week before and had also played against Wales in the midweek. Only Hay and O’Hare would reach double figures in caps and O’Hare’s five goals in thirteen games was pretty good for a Scotland striker of any period. In goal Jim Cruickshank of Hearts was also gaining his third cap that day whilst Bobby Moncur of Newcastle would be gaining his fifth. However, the team had not exactly set the heather alight. A one nil win against Northern Ireland in Belfast, against an Irish side which contained Pat Jennings, Derek Dougan and George Best with O’Hare supplying the goal was as good as it got. This was actually the last game Scotland would play in Belfast for ten years due to safety fears.
This was followed by a nil nil against Wales on the Wednesday and then a scoring blank against England too on the Saturday. Of course had we got the penalty, which as I reach the end of this article I am no longer ambivalent about, it would have been all different. IT WAS A PENALTY REF!
Conspiracy theorists out there may like to point out that there is no video of this game on You Tube to check out the veracity of the penalty claim.