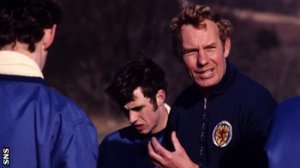 When I was doing research for the Johnny McKenzie piece the other week, someone let me know that Johnny was in fact the second oldest Scotland surviving Scotland player. The first is Bobby Brown of Rangers, who was goalkeeper for Scotland in in 3 internationals or is it 5? Bobby took part in some of the Victory Internationals, which took place in season ’45 -’46. Of the home nations Scotland is the only one that recognises these and so it’s quite hard to keep track of how many exactly.

Richard Keir’s excellent ‘Scotland the Complete International Record’ book does not count them so Bobby is only listed as having won 3 caps there as does the Wee Red Book. The Fitbastats website and Wikipedia have him down for 5 and the SFA website has him down for six, although one of those is a mistake as it gives him credit for playing a game in which George Farm played in goals. Bobby also went on to manage Scotland and had what was arguably the greatest start to any Scotland manager’s career with that famous 3-2 win over England at Wembley 1967. However, in 28 games Scotland only won nine, drew eleven and lost eleven.

To be fair to Bobby, if you look at the ’67 team, Jim Baxter who was the star that day only played two more times for Scotland as his career began to dip. Denis Law due to fitness issues would only play six times for Bobby in total, with three games in ’67, one in ’68 and two more in ’69.

Also, at this time English clubs were still reluctant to release players so at various points you find Billy Bremner and his Leeds colleagues missing from games among others.

Bobby gaves debuts to Ronnie Simpson and Jim McCalliog that day in April 1967. The full line up being; Simpson, Tommy Gemmell, Eddie McCreadie, John Greig, Ronnie McKinnon, Billy Bremner, McCalliog, Denis Law, Willie Wallace, Jim Baxter and Bobby Lennox.
Four years later in his third last game Bobby lines up against England with Bobby Clark (Aberdeen), John Greig, Jim Brogan (Celtic), Billy Bremner, Frank McLintock (Arsenal), Bobby Moncur (Newcastle), Jimmy Johnstone (Celtic), Tony Green (Blackpool), Peter Cormack (Nottingham Forest), Davie Robb (Aberdeen) and Hugh Curran (Wolves). Frank Munro of Wolves and Drew Jarvie of Airdrie would come on as subs. There are some good players in that team but also a few sadly lacking International class particularly compared to the team of ’67. England won 3-1 with Hugh Curran scoring for Scotland.
Bobby would quit a month or so later as Scotland lost another two games, making it four in a row with a defeat to Denmark in Copenhagen in a Euro Qualifier being particularly galling. Bobby would be succeeded by Tommy Docherty and then Willie Ormond who was Bobby’s successor as St. Johnstone manager. Here’s to Bobby and long may he continue to be the oldest Scotland player.