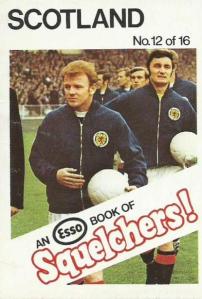 Fresh on from their successful 1970 World Cup coins set, the guys from Esso came up with these crappy things; Squelchers. They were tiny booklets and each of the 16 covered differing topics from the World Cup Story to the Language of Football (?) to one for each of the Home International teams. This is of course is the Scotland one with Billy Bremner leading out the team at Wembley followed by goalkeeper Jim Herriot and you can also see the Colin Stein, Billy McNeill and John Greig in the background and I suspect it’s Tommy Gemmell hidden behind Herriot. Unfortunately, it’s 1969 and the Scots got pumped 4-1 that day.

Inside the Squelcher there are some photos of Scotland players in their club colours including Alan Gilzean, Denis Law, Charlie Cooke, Bobby Murdoch and others. There is also some dialogue with a brief history of Scottish football and some of the players and teams of the past and present but it also gives you such sentences as “Any Scotsman would give his best sporran for the chance to play against England in an International”. 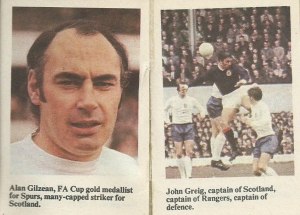 There are two photos from the Scotland v England in May 1970, which ended in a nil nil draw. However, one of the photos credits John Greig when it’s Ronnie McKinnon. The other is of Jimmy Johnstone.

They are still pretty cheap to buy on Ebay but handle them gently as mine has just fallen apart when scanning it.