Another Scottish Football title that I recently recovered at the back of the garage was ‘Fitba’ – a magazine from the late 1990s which was produced by Brass Tacks Publishing from York Place, Edinburgh.

The two contrasting images are from issue 2 [March 1998] with the photo of Billy Bremner leading out the Scotland team [at Wembley I think] relating to an article on arguably our greatest ever captain who had died three months previous, just two days short of his 55th birthday. Some of the tributes are worth repeating – ‘He was Oor Wullie with balls. He was an inspiration on the pitch and in the bar. He duffed up Kevin Keegan in 1975. He was a bloody great footballer.

‘Looking back at the record books, I now realise that the first time I saw Bremner in the dark blue of Scotland was versus Portugal at Hampden in October 1971 when he won his 26th cap. His 54th and final cap was away to Denmark in September 1975 before a ‘Nightclub Rammy’ finished his international career – a much more ‘macho’ ending than most you could argue. 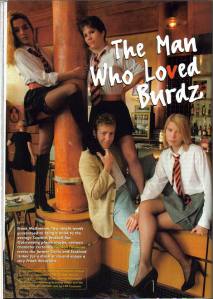 The gloriously non-pc photo of McAvennie and the girls was a publicity shot for his proposed restaurant ‘School Dinners’ and the associated interview doesn’t pull any punches in dealing with drink, drugs, women and Terry Butcher. Macca also claims that Andy Roxburgh never picked him because he [and Charlie Nicholas] stole Roxburgh’s hairdryer during the 1986 World Cup Finals…..

Alongside the interview there is an extract from ‘The fictional diaries of Frank Whursaburdz’ entitled ‘Nipple is my Tipple’. Sigh – they don’t write them like that anymore, well not unless you count fanzines like Partick Thistle’s ‘Sick In The Basin’.

Anyway, William and Francis – two excellent Scottish footballers who were occasionally labelled ‘Bad Boys’ and that’s ‘Good’ enough for me.

Incidently,the magazine also included a two page spread on Pat Nevin, who bemoans ”Don’t call me Jinky” as well as a four page article on the then rising star David Hopkin however as David Stuart has recently waxed lyrical on the Richard Gere of the dark blues we’ll just leave it at that, shall we?