10th September 2015 marks the 30th anniversary of the death of former Scotland Manager Jock Stein at a World Cup qualifying match in Cardiff. The following observations linked to three Scotland match programmes doesn’t begin to do the great man’s career justice but I’d like to say something nonetheless. 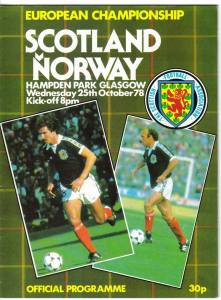 [1] Scotland v. Norway – Euro Championship qualifier – 25th October 1978.Jock Stein took over as manager of a Scotland team one game into the qualifiers for Euro 80 but still low in morale following the Argentina world cup debacle. A crowd of 65,372 turned up for his first game in charge – against Norway – despite there being a bus strike in Glasgow that day – and they saw eleven Anglo-Scots win 3-2. Five home Scots [though none from Celtic] were listed in the 18 man squad and on pages 6 and 7 of the match programme Stein’s address to the nation began with ‘We must all be patient’ before going on to highlight some of the major differences between managing at club and international level. Stein also felt the need to state where he stood on the question of Scotland players in English football, intimating that he believed there were good players on both sides of the border…..

[2] Scotland v. England – Rous Cup – 25th May 1985.Stein guided Scotland to the 1982 World Cup Finals and delivered a trophy in the shape of the inaugural Rous Cup as the result of a 1-0 victory over England at Hampden.Indeed 1985 is the last time Scotland managed to beat their old enemy in Glasgow and it was also Stein’s last home game in charge. England were managed by Bobby Robson, another great football man who sadly is no longer with us. On page 10 of the programme [which is reproduced here] Stein defended the logic of playing England just four days before a vital world cup qualifier in Iceland -which Scotland would also win 1-0.[Two Scotland wins in four days – you see, it can be done….] 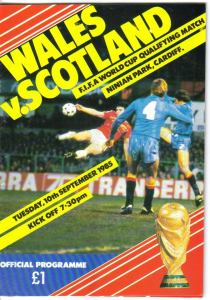 [3] Wales v. Scotland – World Cup qualifier – 10th September 1985.That fateful evening at Ninian Park, Cardiff…..Scotland required a draw to make it into the play-offs and thanks to an admittedly soft penalty award we were able to get one but the Tartan Army post-match celebrations quickly turned to sorrow as the news filtered through that Big Jock had collapsed at the end of the game and had died shortly afterwards in the stadium’s medical room. Thirty years on, the match programme is still tinged with sadness to the extent that it is difficult to read in a totally detached manner. Page 21 is given over to the views of the visiting manager with the heading being ‘British football must be the winner says Jock Stein, C.B.E.’ As it transpired British football was the loser as the groundbreaking manager, who should have been Knighted, passed away. As a Scotland [and former Rangers] supporter I’ve always been envious of the fact that Jock Stein was in charge at Celtic Park longer than he was at Hampden but I am also extremely grateful that he was a Scotland manager during my lifetime with the whole Spain 82 experience being a major highlight.

Thanks Mr. Stein and Rest in Peace.