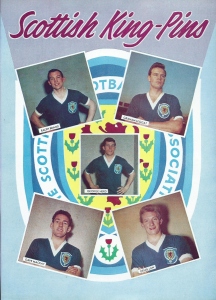 Another one of those cuttings that I’m not sure where it came from whether it was a magazine or an annual but it doesn’t matter as it’s a cracker. Here we have five Scottish players who made their mark in the late 50’s and early 60’s and of course for the Lawman a wee bit further too.

So who do we have? Top left hand corner is Ralph Brand of Rangers. Ralph would only play eight times for Scotland between 1960 and 1962, scoring two goals against Northern Ireland on his debut in November 1960; Denis Law, Eric Caldow (penalty) and Alex Young were the other scorers in a 5-2 win at Hampden. Scoring against Ireland; be it Northern or the Republic was a speciality of Ralph’s as he scored four against Northern and three against their Southern cousins. His eighth and final Scotland goal came against Uruguay at Hampden in May 1962 in his final game. 8 caps and 8 goals and he couldn’t keep his place; if only we had someone with that type of record now.

Next to him is Graham Leggat who recently passed away at the age of 81. Graham’s first cap came in 1956 when he scored Scotland’s goal in a 1-1 each draw with England at Hampden. Graham was an Aberdeen player at the time and would win seven caps as a Don including two appearances at the 1958 World Cup. He would win a further eleven caps as a Fulham player and like Ralph Brand would score eight goals in total.

In the middle is George Herd who was a Clyde player during his time with Scotland and although he would play over 300 games for Sunderland he was never capped as an Anglo. George first played for the National side on April 19th, 1958 and if you were one of the 127,874 crowd you probably don’t want a reminder of the score. (Whisper it, we lost 4-0). George only played five times for Scotland but is one of only 11 Scottish players to have played against Turkey! This was in a 4-2 defeat friendly in Ankara in June, 1960. His only goal would come in a 3-3 draw with Hungary just a few days before this. In his final game he played with Messrs. Brand, Mackay and Law; three of the other kingpins.

Bottom left hand corner we have the irrepressible Dave Mackay. Dave would play twenty two times for Scotland starting as a Hearts player in 26th May, 1957, where like George Herd he didn’t have the best of starts with Scotland going down 4-1 to Spain in a World Cup Qualifier but thankfully we had already beaten Spain 4-2 at Hampden and would qualify for Sweden 1958. Surprisingly, Dave didn’t feature again until just over a year later when he was drafted in as part of the team for our final game of the World Cup Finals against France which was lost 2-1.

Dave would score four times for Scotland; the first two as mainly consolation goals in 4-1 defeat to Austria and then in a match against England where we scored a paltry 3 goals and England scored a few more but like the play ‘Macbeth’ maybe it’s one those things we shouldn’t give a name to. Happier times were ahead when he scored two against Norway in November ’63 with Denis Law hitting four in a 6-1 friendly win at Hampden. Dave would play his last Scotland game in October ’65 in a 3-2 defeat to Northern Ireland with fellow Spurs player Alan Gilzean netting a double.

Finally there’s Denis Law, who scored on his Scotland debut in October 1958 in 3-0 win over Wales at Ninian Park, Cardiff; Graham Leggat was also among the scorers that night with Bobby Collins hitting the third. Of course Denis went on to be the legend that he still is, with a Scotland career spanning 16 years and 55 caps making his swansong appearance in the first game of the 1974 Wold Cup against Zaire. Denis, is of course our equal top goalscorer of all time with Kenny Dalglish on 30.

So five Scotland players with 51 goals between them from around the same era; which would be nice to have again sometime.