Arthur Graham will be 63 on October 26th. Arthur gained 11 caps for Scotland, all whilst playing for Leeds United although due to his appearance’s in football cards in the early 70’s I always think of him as a winger for Aberdeen. Arthur also went on to play for Manchester United and Bradford.

His first cap came shortly after his move from Aberdeen to Leeds; coming on as a sub against East Germany for Willie Johnston in a friendly in September, 1977 at the Weltjugend Stadion in East Berlin. Scotland lost one nil with Leeds teammate and goalkeeper David Stewart making his one and only Scotland appearance that night. Like many players, first capped by Ally Macleod, Arthur was never given the chance to establish himself as Ally seemed to prefer players capped by Willie Ormond and his predecessors.*

His second cap came after the 1978 debacle, when he replaced Joe Jordan in a Euro Qualifier against Austria in Vienna. Within minutes of him coming on Scotland went three down but a late revival through goals by Gordon McQueen and Andy Gray must have impressed a watching Jock Stein as he was to be in charge in Scotland’s next game.

Arthur started against Norway at Hampden in October, 1978 and would win the penalty in the 87th minute which meant big Jock’s first game in charge would be a win as Scotland won 3-2 with two goals from Kenny Dalglish and the penalty from Gemmill.

Arthur would miss Scotland’s next game a one nil defeat to Portugal but following that he would play in the next seven games, only being on the bench for one of them.

Arthur played in all three games of the May, 1979 Home International series, which saw Scotland get thumped 3-0 by Wales and especially John Toshack as he hit a hat-trick; in the first game. A small crowd of 28,524 saw Scotland beat Northern Ireland with Arthur scoring the only goal of the game to give Scotland victory. The final game of the series saw Scotland go down 3-1 to England at Wembley.

Defeat was also to follow in June ’79 at Hampden as the newly crowned World Champions Argentina turned up in Glasgow with a young Diego Maradona giving the Scots a masterclass in football. The game is not so much remembered for Arthur’s second Scotland goal which came as a consolation in the 85th as the Scots toiled 3-1.

Five days later, Arthur would be part of the team that beat Norway 4-0 in Oslo with Jordan, Dalglish, John Robertson and Gordon McQueen scoring. Although both Robertson and Arthur played in this side together, it would perhaps be Robertson coming more to the fore as an important player for Scotland and taking the left sided berth that would see Arthur’s Scotland career peter out.

Interestingly enough, Arthur would be a sub come the next Scotland game in September of 1979; he would replace Davie Cooper. It would take a few years though for Cooper to install himself as a favourite of Jock’s. Scotland drew one each with Peru at Hampden with Asa Hartford scoring the Scots goal.

A return to Euro Qualifiers in October against Austria at Hampden saw Scotland draw one each with Cooper coming on for Graham this time. Scotland’s goal was scored by Archie Gemmill with Hans Krankl scoring for Austria.

Arthur then dropped off Jock’s radar and returned for his final cap against Wales in May 1981 when the Scots again lost to Wales 2-0 with Ian Walsh hitting a double. 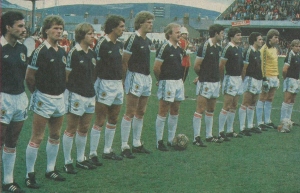 So Happy birthday Arthur and all the best.

* For further information of the players Ally MacLeod gave debuts to; please type in ‘Ally Oops’ as a search.