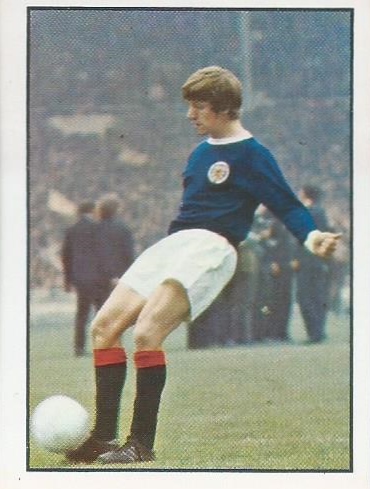 I have been adding cards and stickers to the Epistles website and sourcing a few on eBay to add as well. I’ve been trying to buy some of the lesser known players on cards, although I haven’t as yet stretched to buying the John Fleck Futera Future Star one yet. It’s quite sad to say I had bid over a fiver for a Swedish sticker of . . . wait for it . . . one cap wonder; Mike Galloway, recently and lost out to someone else. If it was you, then it’s good to know there’s someone sadder than me out there.

As for this one, I quite liked that there are few photos of Tony Green available in a Scotland strip as he only played six times and quite a few were substitute appearances.

Tony started his career at Albion Rovers but soon moved on to Blackpool in 1967, where he would win all of his six caps, playing alongside Tommy Hutchison for a few seasons, where he was a much loved skilful midfield player who like Hutchison would make it into the Blackpool FC Hall of Fame.

His first cap came at a time when Scotland were struggling. Bobby Brown whose Scotland management career had started with the high of the Wembley ’67 had failed to guide Scotland to the World Cup in Mexico and had been trying to rebuild, but his time in charge was petering out.

Tony would come on as a sub at half time for Pat Stanton in the quagmire of Stade De Sclessin in Liege, Belgium on 3rd February, 1971 in a European Nations Cup Qualifier as it was. Scotland toiled to a 3-0 defeat in the mud filled pitch, a video of which I posted on here a few months back. Also, making his debut that night was Archie Gemmill and making his final appearance was Tommy Gemmell.

Tony would again replace Stanton in the 75th minute of the next qualifier a 2-0 defeat to Portugal in April, the same year. Making their debuts that night and perhaps showing the depths of problems Scotland had at the time were Davie Robb of Aberdeen, Jim Brogan of Celtic and Airdrie’s Drew Jarvie who would come on for Jim McCalliog who perhaps summed up the promise of Brown’s early days in charge with his scoring debut at Wembley only for him never really to make an impact after that; all decent and good club servants but not Internationalists by a long shot. However, with no Leeds players in the team it might suggest that English clubs were failing to release players for the National team, which was something that frustrated Bobby Brown throughout his time in charge. Making their farewell bows along with McCalliog that night were sixties legends Willie Henderson and Alan Gilzean.

Scotland were to have a poor Home International Championship that year; Tony would miss the first game, a nil nil draw with Wales at Ninian Park, Cardiff. Tony would start at Hampden, three days after this on May 18th, 1971 against Northern Ireland. Again, a fairly inexperienced team with only one player having more than ten caps starting the game, unfortunately for the winner of his 42nd cap that night, John Greig scored the only goal for the Irish to win one nil.

Onto Wembley and although Billy Bremner and Jimmy Johnstone were to be involved this time, the English won 3-1, all too easily against such lightweights as Green, Robb, Hugh Curran of Wolves (scorer of Scotland’s goal) and Forest’s Peter Cormack. Green would be substituted for Drew Jarvie in the 82nd minute.

Despite chants and calls for him to go, Bobby Brown stumbled on for two more games, both one nil defeats away to Denmark and the USSR, neither of which Tony played in, with the Euro defeat to Denmark being a particularly humbling score at the time.

A new Manager and a new attitude as Tommy Docherty brought some needed enthusiasm back into the Scotland fold. Tony was in the squad for Tommy’s first game in charge against Portugal in October ’71 but didn’t get to make an appearance.

However, Tony was back into the team for the second game of the 1972 Home Internationals; Scotland had beaten Northern Ireland with goals from Denis Law and Peter Lorimer in the first, before facing Wales at Hampden on 24th May. Scotland won one nil with Lorimer again providing the goal.

Green would be on the subs bench for the game against England a few days later with fellow midfield players Asa Hartford and Lou Macari emerging to claim their spot in front of him. Scotland lost one nil to England in a rather tousy affair, which saw 20 fouls committed in the first twenty minutes. Green would come on in the 74th minute for Willie Donachie for his final appearance in the dark blue of Scotland.

Fate would deal Green a cruel blow in the following season, shortly into his Newcastle career following a £150,000 move from Blackpool, he would fall victim to a cartilage injury in September 1972, effectively ending his career at 25.

However, Tony is still active in football as for over thirty years he has been on the Pools Panel alongside Gordon Banks and Roger Hunt, although all too often he has predicted Partick Thistle for a nil nil draw for my liking.