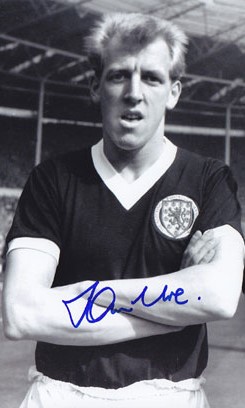 Ian Ure will be 76 on December 7th and Colin Hendry will also celebrate his 50th birthday then. Both players were well known for their striking blonde hair and both started out at Dundee but for Ure, Dundee would perhaps be seen as the pinnacle of his career whereas for Hendry it’s more where he served his apprenticeship before going on to greater things.

Their Scotland careers were also quite contrasting, Ure would win eleven caps and all by the time he was 27, Hendry would not be capped by Scotland until the age of 27 winning 51 caps in total.

Ian Ure was first capped by Scotland in November, 1961 as a Dundee player against Wales at Hampden with Celtic’s Billy McNeill dropping out; also making his debut that day was his fellow Dens Parker Alex Hamilton. Both would play a major part in Dundee winning the 1961-62 championship as well as their run all the way to the European Cup Semi-Finals, the following season. Scotland would win 2-0 with both goals from Ian St. John.

Three weeks later and Ure retained his place for the vital World Cup play-off against Czechoslovakia. Due to injuries Scotland would field some inexperienced players with Hugh Robertson also of Dundee making his only Scotland appearance and goalkeeper Eddie Connachan also winning the first of his two caps.

Although St. John was to score two goals in the Heysel Stadion, Brussels; it was to be another night of misery for Scotland in Belgium as the Czechs scored a late goal to take the game into extra time. Two more Czech goals in the extra period and Scotland had failed to reach the World Cup Finals in Chile. As for the Czechs they went all the way to the final before being beaten 3-1 by Brazil.

Ure would be dropped for the next two games in favour of McNeill but would be in the starting line-up to face Wales once more, this time at Ninian Park, Cardiff in October, 1962. Scotland won 3-2 with a penalty from Eric Caldow with Denis Law and Willie Henderson scoring the others.

A month later and a crushing defeat of Northern Ireland at Hampden saw the Scots hit five to a solitary goal by the Irish. Denis Law scored four of those goals with Henderson getting the other.

April 6th, 1963 saw Ian win cap number five as the Scots beat the Auld Enemy at Wembley 2-1 with a double from Jim Baxter. This game is mainly remembered for the Scots going down to ten men early in the game after a leg breaking tackle on Eric Caldow by England’s Bobby Smith.

The drama was to continue a month later as Scotland faced Austria in a “friendly” at Hampden. Scotland were 4-1 in front when in the 79th minute referee James Finney abandoned the game as he stated “I felt that I had to abandon the match or somebody would have been seriously hurt”. By this point, two Austrians had been sent off and a few scuffles were breaking out between players with Denis Law having helped himself to a couple of goals, among those handing out a punch or two.

Denis would score a hat-trick on the 4th June, 1963 against in Bergen but unfortunately and at the time rather embarrassingly the part-timers of Norway scored 4 to give them a famous win.  This was followed by another unexpected defeat to the Republic of Ireland at Dalymount Park, Dublin five days later with Noel Cantwell scoring the only goal.

The prospect of playing Spain in the Bernabeu four days later was not something the Scots were looking forward to. With Billy McNeill, Frank McLintock, (then of Leicester City) and Ure all starting, it was clear Scotland were out to defend. That plan went out the window as the Spanish went into the lead after eight minutes. However, in a blistering 17 minute spell midway through the first half Scotland scored four goals through Law, David Gibson of Leicester, club team mate McLintock and Davie Wilson of Rangers.

The game ended 6-2 to Scotland; Henderson and St. John added goals in the second half. By the time of his next International against Northern Ireland at Windsor Park in October 1963, Ian was an Arsenal player. Ian was transferred for £62,500, which was a lot of money at the time for a defender. He would miss only one game in his first season at Arsenal but injuries would soon play their part in retaining his place in the team. Ure’s time at Highbury is not looked upon too kindly by Arsenal fans even though he would play just over two hundred games for them. A mistake in the 1969 League Cup Final seems to be unforgiveable in the eyes of most of the Gunners fans at the time.

Scotland would be beaten by Ireland by two goals to one with St. John being the lone Scot to score that day. However, the Scots did get their revenge on Norway on November 7th as they beat them 6-1 at Hampden with Law hitting four and Dave Mackay the other two.

This would prove to be Ian’s last game for four years but another one of his ex-Dundee team mates was to make his international debut that night, Alan Gilzean who would go on to win 22 caps with Scotland and would flourish at Tottenham Hotspur over the next few years.

Although, Ure would continue to make over 20 appearances per season at Arsenal, he was becoming second choice to Frank McLintock and Terry Neill.

In October 1967 he returned to the national side for one more game; a 1-0 defeat to Northern Ireland in Belfast, which would effectively seal Scotland’s fate in their attempt to reach the play-off rounds of the European Nations Cup as England would only need a point in the final qualifier / Home Internationals to go through. Scotland would draw one each at Hampden in what was effectively the play off in February 1968.

As to Ian he would move to Manchester United for a couple of seasons but by then knee injuries meant he was never the same player again.                Happy Birthday to Ian and also to Colin Hendry and all the best for the coming year.