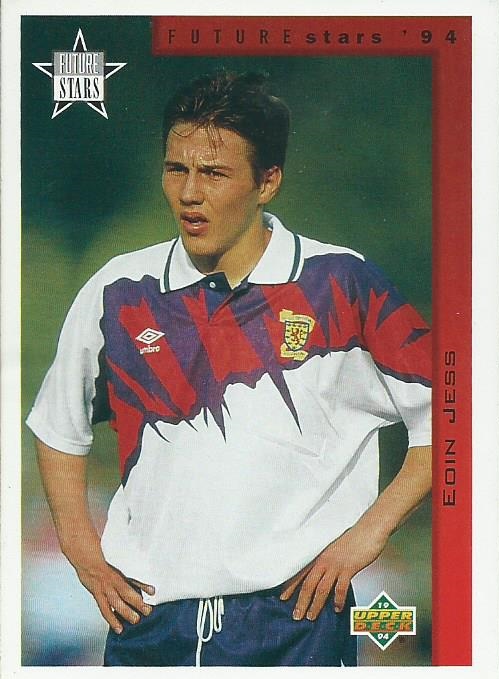 Happy Birthday Eoin Jess. Eoin will be 45 on December 13th. It would be fair to say that his Scotland career never really got off the ground, never reaching the heights he was expected to. By the time of his full Scotland debut in November 1992, he had made 15 Under 21 appearances. The qualifying for USA 1994 had already begun in a strong group. We had already lost 3-1 to Switzerland in Berne, drawn 0-0 with Portugal at Hampden before Jess was called up for the home game against Italy. Malta and Estonia were the minnows in the group.

Only 33,029 turned up to see Scotland play Italy at Ibrox and typically with Italian involvement the game ended nil nil, Eoin had come on for Gordon Durie in the 71st minute. Jess would start our next game against Malta at Ibrox, which for some reason the Scottish public decided to turn out in higher numbers with 35,490 turning up. Scotland coasted to a three nil win with two goals from Ally McCoist and one from Pat Nevin. Due to a leg break Jess missed Scotland’s next few games which included a five nil humping in Portugal, he would return against Switzerland in September 1993 at Pittodrie, although this would only be as a sub to fellow Dons player Scott Booth. The final score was one all with John Collins providing the Scotland goal. He would start the next game in Rome against Italy which saw Scotland defeated three – one.

March, 1994 saw Jess come on for Pat Nevin for just over twenty minutes against Netherlands at Hampden with the Scot losing one nil. A month later and roles were reversed as Jess started against Austria in Vienna in a friendly which Scotland won 2-1 with goals from John McGinlay and Billy McKinlay. Nevin would replace Eoin with six minutes remaining. It was well seen that neither Scotland nor Holland reached the ’94 World Cup as we played them again in late May ’94. Jess was given the second half in Utrecht but the Scots lost three one with fellow Dons players among the goals. Duncan Shearer for Scotland and sadly Brian Irvine for the Dutch.

Jess made another substitute appearance in opening game of Scotland’s successful Euro campaign towards England ’96, this was against Finland in September ’94 in Helsinki, a game we won 2 nil with Duncan Shearer and John Collins scoring.

Another substitute appearance a year later in a 2-0 friendly defeat in Sweden was next. Jess would open the scoring at Hampden in a game against the mighty San Marino in November ‘95, which saw Scotland score five goals to no reply. Scott Booth, Ally McCoist, Pat Nevin and a Francini own goal completed the rout.

Again the pattern of missing games continued with Jess coming back in for a game against the USA and then a substitute appearance versus Colombia in Scotland’s warm up US tour prior to the Euro’s ’96 in late May. These were his first two games as a Coventry City player. Scotland lost both these warm up games, 2-1 and 1-0 respectively.

Eoin only played 6 minutes in the tournament, coming on for Gordon Durie at Wembley as Scotland were 2 nil down to England.

By the time of cap 14, Jess had returned to Aberdeen in resurgent form and appeared as a substitute in a 1998 World Cup warm up against Denmark which saw Scotland get beat one nil at Ibrox. The World Cup would come and go before Jess returned to the Scotland line up in 2-1 defeat to the Czech Republic at Celtic Park. Jess would score Scotland’s goal in a game which is probably remembered more for the booing of Gary McAllister.

Benched again for the following fixture, a surprising one nil victory of Germany in April 1999 with Don Hutchison scoring the only goal. His final two caps also saw him as a sub again in a despairing one all draw with the Faroes, when he came on in the 89th minute and saw Scotland lose a goal in the 90th.

His final appearance was in the Czech Republic, coming on, in the 70th minute for Iain Durrant as Scotland were two one up, with goals from Paul Ritchie and Allan Johnston putting us in the lead. Unfortunately, for Jess and Scotland we lost a further two goals to see us go down 3-2.

So there you go, all that potential that never saw fruition but in fairness to Eoin he was never really given a run in the team with only 6 starts in 18 games and none of them consecutively.

Happy Birthday Eoin and all the best.