The start of the year seems so far away; we had had a good start in 2014 to our Euro qualifying with a narrow defeat to Germany, followed by our close victory over Georgia at Ibrox, then a good point in Warsaw and finally a great win against the Irish at Celtic Park. Seven points on the board and we were happy enough knowing we had qualification in our hands.

The downside would be the defeat to England but we shrugged that one aside; we had gotten the result we needed against the Republic and that was what counted.

The first outing in 2015 was a rather insipid 1-0 win over Northern Ireland in front of a sparse crowd due to the rip off ticket prices, this was followed a few days later with the Gibraltar game at home. Despite the rather embarrassing moment of the Gibraltan equaliser, the job was done and we at last had that hat-trick. (That reminds me wouldn’t it be good if someone wrote an article all about the players who managed to hit a double but were unable to reach three over the years. Well, someone already did and it will be available in issue 4 of the Scotland Epistles coming soon.) What I remember most about this game was how bloody freezing it was!

Another poor friendly against Qatar was next at Easter Road but at least we won a cup and I’m sure it will look good in the museum in years to come. Away to the Republic was a fairly poor performance and we started to get a wee bit worried about qualifying. Tbilisi and once more the wheels fell aff the barra. Again, a lacklustre showing and no evidence of any immediacy or desire to win the game; more of a just stick to the plan and a goal will come mentality.

The Germany (on a bloody Monday night!) and Polish home games both had moments of ecstasy but ultimately agony as we gave away goals too easily and never had that wee bit of luck that could have seen us through. However, we lost out to three teams that were beatable; the Germans were a pale shadow of the World Cup winning side and never really performed to their best. We did well to take points off of Poland but late goals scuppered us twice and as for the Republic; a very ordinary but determined team that got some of the breaks that we didn’t but perhaps they were merited by their resilience to keep going and get the result needed. 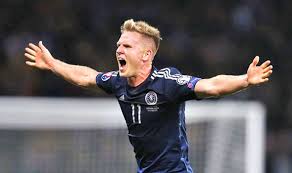 Party time in Portugal against Gibraltar was an anti-climax but it was a decent performance and a fillip to WGS as he decided to stay as manager. Whether he has the managerial nous to get us through to Russia 2018 we will see but the lack of depth in the squad and very few youngsters pushing for places is worrying.

However, that said 2015 is now in the past and in the past it must remain but we can still rise and be a footballing nation again. England awaits and Scotland expects. Don’t let us down boys!

Part 2 will look at the year from the Scotland Epistles, Bullshit & Thistles perspective.