George Connelly, will be 67 today. George only ever played in two games for Scotland and yet made his debut in perhaps one of Scotland’s most memorable footballing nights. It would be fair to say that down Parkhead way, George will be remembered with an admiration tinged with a forlorn sadness about what might have been.
George, it seemed had an abundance of talent but also had his issues including depression that affected him at the height of his fame. In these more enlightened times George might have been able to talk more about his issues and be helped to work through them more openly. However, football can still be a cruel environment in which to show any signs of mental health issues, so who knows how things would have turned out. As it was Celtic and Jock Stein tried to give George as much support as they could but it was not enough to see him through his troubled times.
Willie Ormond was also supportive of George and picked George for Scotland to travel to Switzerland in June, 1973. George who had just won the Scottish Writers Player of the Year award for season 1972- ’73 was overcome with anxiety at Glasgow Airport and left before the team boarded the plane.
Ormond would give George another chance three months later in what would be Scotland’s most important game for years. Willie must have held George in such high regards as he thrust him into the team to face Czechoslovakia in September, 1973. George was not the only debutant that night as Ormond also chose to start with Coventry’s Tommy Hutchison.
As we all know Scotland won the game 2-1 and history was made as we returned to the World Cup Finals for the first time in 16 years.
Although, George would miss the next game, come November he played in the friendly at Hampden against World Cup Hosts West Germany. Scotland were to go into the lead in 7 minutes through Big Jim Holton but Uli Hoeness would equalise in the 80th minute to deny Scotland the win. 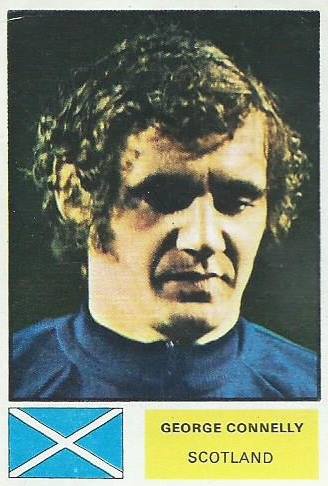 George would bail out again on his club side over the next few months and although he would be back in the Celtic side by the end of the season, Willie left him out the 22 for the finals although he was one of the 18 players who were on Standby should they be needed. It was not to be and George never graced the dark blue of Scotland again.
Happy Birthday George and I hope this year finds you well.