A way back in the mid-70’s UEFA decided to go with a more Youth centred structure and scrapped the idea of Under-23 games. Scotland’s last Under 23 game was played in March, 24th, 1976 against Netherlands.

However, this is all about the first Under-21 game and when you look down the list there are some impressive names in there but there are also a couple of obscure players in there too.
The first game was also a European Championship match played against Czechoslovakia in Pilsen. Andy Roxburgh had been made the SFA Director of Coaching in 1975 and it was he would take charge of the Under-21 team
In goals was a not very youthful Bobby Clark of Aberdeen. Bobby was obviously one of the overage players. Bobby had gained 17 full caps by this stage and although he wouldn’t play again for the first team, he did travel to Argentina as part of Ally Macleod’s squad. He would play three times for Under-21 team.
In defence there was full back pairing of George Burley of Ipswich and Manchester United’s Arthur Albiston. Both would be capped at Full International level with Burley gaining 11 caps and Albiston 14 but would never play in the same team with the majority of Arthur’s cap coming after Burley’s International playing career was finished.
Pat Stanton was the other old head in this one; the Hibernian legend lining up for the Under-21’s at the age of 32 but not as a Hibs player but as a Celt. Pat had gained 16 full caps in total. Most likely playing alongside him was Celtic’s Roy Aitken, Roy, would of course go on to win 57 caps and captain Scotland 27 times.
I have said most likely as there was one David Narey playing in the team that day too. Narey of Dundee United would go on to win 35 caps and of course, score a wonderful goal against Brazil in the process. It is more likely Narey was in the midfield alongside some very, very talented players; Davie Cooper, Tommy Burns and John Wark.
Cooper was being capped as a Clydebank player and although my first thought, was would be perhaps he was the only one; there were others. John Henry, Sean Sweeney and Gary Teale were all capped at Under-21 level as Bankies. Of course, Cooper would go on to be a legend and played 22 times for Scotland scoring that vital penalty at Ninian Park, Cardiff to send Scotland to the World Cup play-off against Australia. He furthered Scotland’s push to Mexico ’86 by scoring a wonderful free kick against the Aussies at Hampden as Scotland struggled against a stubborn Australian defence.
Tommy Burns of Celtic is perhaps another player who should’ve won more caps for Scotland but there was a wealth of talent around that time, playing at the top of the English League but 8 caps were all he would earn.
Finally, in the midfield was John Wark, a legend at Ipswich, not so much at Liverpool but definitely in Hollywood, where his performance in ‘Escape To Victory’ has been seen as influential in the work of DiCaprio, Depp and others. John would win 29 caps scoring 7 goals in total including two against New Zealand in the 1982 World Cup.
Up front was the sprightly Paul Sturrock of Dundee United. Sturrock would also represent the full side 20 times scoring 3 goals.
Then we come to one of our more obscure players; David McNiven of Leeds United. McNiven would play three times for the Under-21 team and would score against Wales in a 3-2 victory. David struggled to get into a Leeds United team full of stars such as Joe Jordan and Allan Clarke, however he did play 23 League games for Leeds scoring six goals in the process. His desire to play regular first team football saw him move to Bradford City, where in a five year period from ’78 to ’83 he would play 212 games scoring 64 games before moving on to Blackpool and then Halifax Town. There was one consolation for David; he did get to appear in a set of football cards; the Topps English set of 1978/79. 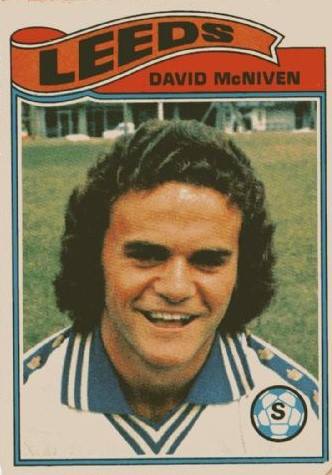 McNiven would be replaced by Kilmarnock’s Davie Provan who of course would go to play for Celtic and win ten caps for Scotland scoring one goal, in a 3-1 win over Israel at Hampden in a 1982 World Cup Qualifier.

Lastly, there’s Lindsay Muir of Hibs, who would replace Narey during the game. Lindsay would only ever play 18 league games for Hibs before moving to St. Johnstone, then to Berwick Rangers whom he would play 220 League games for in his first time there and then a further 44 after a stint at Cowdenbeath in between. Remarkably like McNiven he too would be immortalised in a set of football cards; the 1977/78 Scottish set.
So with all this wealth of talent on show; how many goals did this Scotland team score? None . . but then again neither did the Czechs.
(Thank you to The Fitba’ Stats website for their help in compiling this article and also keep remembering to like our stuff to ensure Facebook keeps sending it to you.)