Happy Birthday to Archie Gemmill who will be 69 today. Archie is of course forever in our hearts for transcending the mire that was the 1978 World Cup campaign with a moment of glory that most of us can relive in our heads verbatim, imagining every twist and turn as he weaves his way through the Dutch defence and curls the ball past Jongbloed. If that was not enough, he then remembers he’s a wee man from Paisley and not a World Superstar and so raises his arm defiantly with no excessive show, whereas the rest of us would have ran for at least half an hour with our taps aff proclaiming ourselves a Demigod. Not Archie, he knew there was a job to do, so no fuss let’s get on with it. Unfortunately, it didn’t pan out that way.
Archie was actually first capped in 1971 under Bobby Brown and would go on to play for Tommy Docherty, Willie Ormond, Ally Macleod and Jock Stein gaining 43 caps in the process in a ten year Scotland career, scoring eight goals.
It didn’t start too well among the mud of Flanders Field, Belgium or rather the mudbath of Stade Sclessin, Liege in February, 1971 on a pitch that was more a swamp than anything. Scotland lost 3-0 in the second game of their Euro Qualifiers. Brown would pick a lot of players in his last few months as manager but as for Archie, he was left out until Docherty’s first game in charge v Portugal in October ’71. Scotland won 2-1 with goals from Derby teammate John O’Hare and Archie himself.
His next game was a friendly against the Netherlands or Holland as we would have called them back then. Scotland got beat 2-1 in Amsterdam. It was the only time that the late Johan Cryuff played against Scotland and he scored the opening goal after 5 minutes.
Archie played a few more games for Docherty including 1-0 defeat to England at Hampden in ’71 but Brian Clough’s reluctance to let him travel to Brazil for the Independence Cup meant he was temporarily shelved for a few years. The World Cup ’74 came and went without him but Archie had at least, won two English League Championships with Derby in the meantime.
October, 1975 saw him back in the team lining up in midfield with his Derby teammate Bruce Rioch as Scotland beat Denmark 3-1 in a Euro Qualifier.
Archie was named as Captain by Willie Ormond for the 1976 Home Internationals, the position had been vacated by Billy Bremner following his ban in late ’75 after the Copenhagen farce. Scotland had a Grand Slam that year beating Wales (3-1), Northern Ireland (3-0) and England (2-1) all at Hampden with Archie getting among the goals in the Irish game. This was a purple patch for Scotland with Archie, Rioch and Don Masson firing on all guns.
Ally MacLeod would come in and Archie would once more find himself sidelined with Rioch being given the Captaincy and Asa Hartford regularly being chosen ahead of him. By the start of 1978, he was a Nottingham Forest player and although he captained the side on occasion it was only in Rioch’s absence. Archie would win the 1977-’78 English First Division and indeed would score the Match of the Day goal that season too.
Argentina ’78 and Archie was left out of the opening game against Peru, however with things having gone pear-shaped with Peru firing into a 2-1 lead, Masson and Rioch were hoisted off and Arche and Lou Macari brought on.
Archie was made captain for the Iran game but even his drive and desire could not raise the Scots game after the shock of defeat to Peru. It is always worth remembering that Scotland were the third seeds for our group that year but even with that, they were still expected to beat Iran. As we are taught in history in Tartan Army school we slumped to a 1-1 draw.

Rioch was back in for the last group game against the Netherlands to captain the side but Archie kept his place and immortality awaited him but before that he did have to hit a penalty to give the Scots a 2-1 lead just after half time and the rest as they say is history.
Jock Stein would make Gemmill his Captain and in his very first game he repaid Jock for this by calmly slotting away another penalty in the 87th minute as Scotland narrowly beat Norway 3-2 at Hampden in October 1978. Results under Jock Stein were generally quite inconsistent with defeats outnumbering the wins and by October ’79 Archie was now playing with Birmingham City
Scotland finished their 1980 Euro campaign with a 1-1 draw with Austria at Hampden with Archie scoring the only goal, followed by two defeats to Belgium and then a 4-1 defeat of Portugal at home with Archie once more hitting a penalty. Archie continued to be part of Jock Stein’s plans for the World Cup Qualifying campaign towards Spain in 1982. He would play in the opening campaign win in Stockholm, Sweden with Gordon Strachan playing a one two with Archie to net the only goal.
Archie would also play in the 0-0 game with Portugal at Hampden, then the 1-0 precious away victory over Israel in Tel Aviv.
His final game for Scotland would be the 1-1 draw with Northern Ireland in the World Cup campaign in front of a 78,444 crowd in March 1981.
Archie would play for another few years including stints at Wigan and the Jacksonville Tea Men before returning to Derby for a final spell.
His son Scot would play for Scotland too and indeed would be a non-playing squad member at the Euros ’96 and World Cup ’98.
Archie would coach the Scotland Under-19 team to second place in the 2006 Under 20 European Championships and with that qualification for the Under-20 World Cup in Canada in 2007.
So Happy Birthday Archie and all the best. 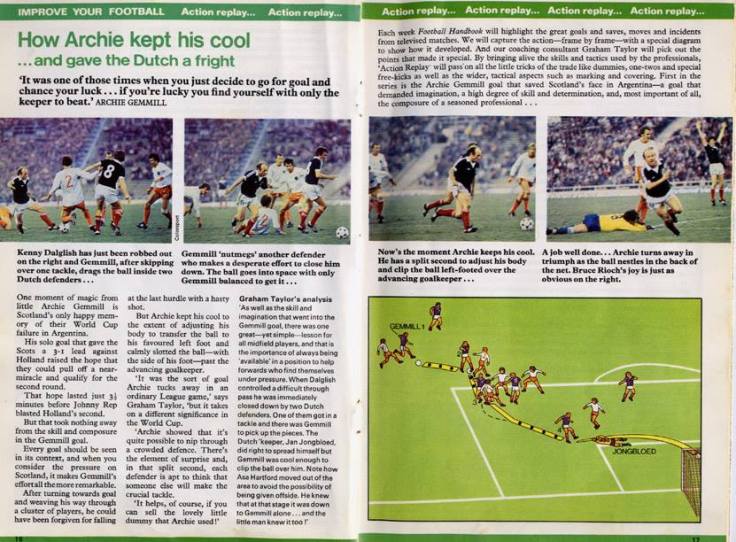