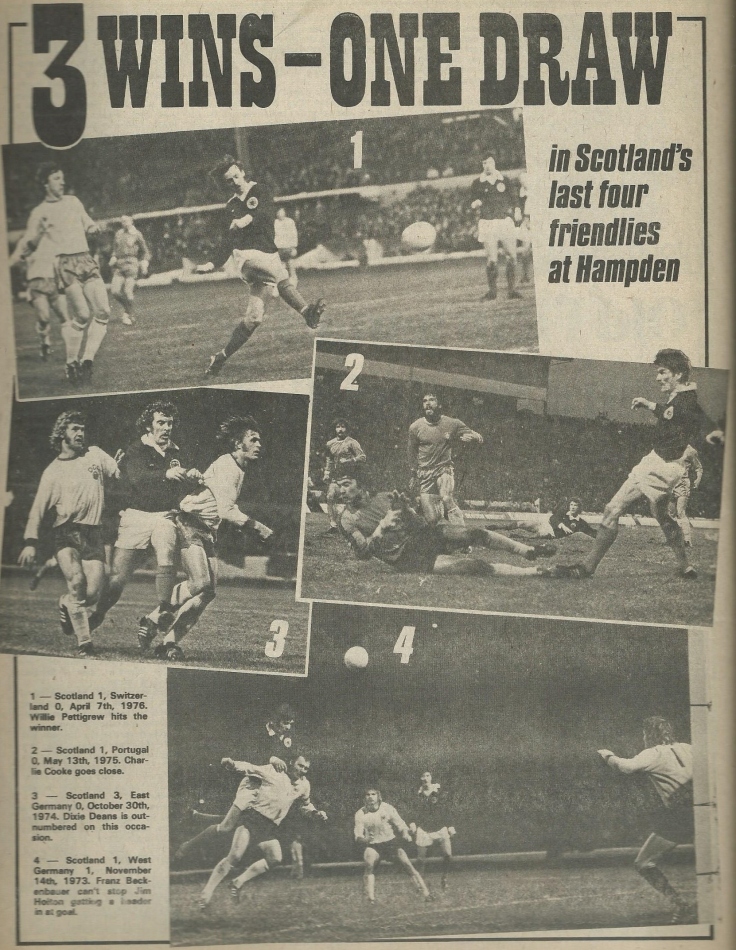 So, three friendly wins in a row, did it not make you want to dance in the streets of Mount Florida, Kings Park or even the aisles of Asda, Toryglen? Maybe not, but within hours I came across this in an old Shoot magazine from 11th September, 1976 with the title 3 Wins – One Draw in Scotland’s last four friendlies. It wasn’t just the title that struck me but the story behind the pictures is quite interesting too.

Picture 1 it says “Scotland 1, Switzerland 0, April 7th, 1976. Willie Pettigrew hits the winner.” Yes, Willie did hit the winner, two minutes into his Scotland debut and two minutes into the game. The Motherwell striker would only play five times for Scotland and scored two goals; the other coming in the next game as Scotland beat Wales 3-1 at Hampden in May.

The Swiss game was hit by a lot of cancellations and so Willie Ormond picked a team with 5 players starting their first Scotland games including Alan Rough and Frank Gray but making their one and only appearances were Tommy Craig of Newcastle, Alex MacDonald of Rangers as were both subs; Rangers Bobby McKean who replaced Pettigrew at half time and Des Bremner of Hibs.

Bremner would go on to win the English First Division with Aston Villa and indeed would be an ever present for the Villans that season, as would fellow Scot Ken McNaught but Des was never capped again. Mind you. McNaught was never capped at all although his father Willie McNaught as capped 5 times as a Raith Rovers player in the fifties. Both would win the European Cup the following season. Anyway I digress, so back to the matter at hand.

Picture 2 says “Scotland 1, Portugal 0 May 13th, 1975. Charlie Cooke goes close.” Charlie Cooke had made a bit of comeback down at Stamford Bridge after returning to Chelsea from Crystal Palace and had been recalled to the Scotland squad for a Euro Qualifier against Spain in February, 1975 but this photo is actually of Charlie’s last game for Scotland. The only goal of the game was scored by Portuguese defender Artur. In the background is Rangers player Derek Parlane. Derek played football in Hong Kong, Belgium and New Zealand – Any photos anyone?

Picture 3; “Scotland 3 East Germany 0, October 30th, 1974. Dixie Deans is outnumbered on this occasion.” Dixie Deans in a Scotland strip! Yep, Dixie played twice for Scotland and was first capped on this night. His second would come in a Euro Qualifier against Spain at home a month later. Which is one of those Coulda Woulda Shoulda nights for Scotland. Had Tommy Hutchison scored that penalty when we were 1-0 up against Spain, a place at the Euro Finals in ’76 could have been ours.

However, in one of life’s little ironies Tommy scored with a penalty to open the scoring against East Germany on that October night. How could he not have missed that one instead? The Two Kenny’s scored the other goals; that being Burns and Dalglish.

Finally picture 4 – “Scotland 1, West Germany 1, November 14th, 1973. Franz Beckenbauer can’t stop Jim Holton getting a header in at goal.” Not sure if it’s the goal, but Big Jim did score in the 7th minute to give Scotland the lead. Holton of course is a Scotland legend although it is strange to think of him that way when he only played 15 games, scoring two goals and only played one more game after the ’74 World Cup. Of course there is the song and also the fact his other goal was against Czechoslovakia in ’73 as we achieved a return to the World Cup after a 16 year absence.

Uli Hoeness would equalise in the 80th minute to give the Germans a draw.

Sorry about the quality of the pictures; it’s a pity it wasn’t in one of the glossy pages or even better brilliant colour. Please remember to click on our page and see what else we’ve been up to of late.