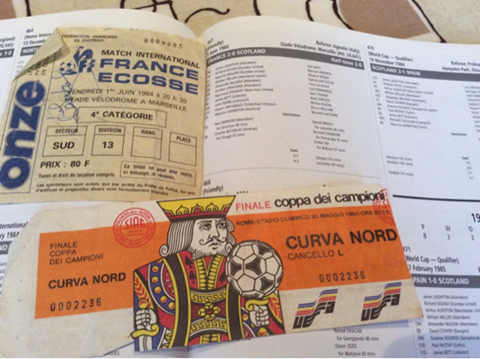 Following on from Kevin Donnelly’s excellent tale from Mexico ’86, we have one from Hamish Husband from France ’84. Don’t forget we’re always looking for articles for the Facebook page and indeed the magazine.

There is always a start to a trip, this one was the 2-0 Dundee United first leg semi-final victory over AS Roma at Tannadice, April 1984, I was there and immediately planned a visit to the forthcoming European Cup Final in Rome itself, likely fellow finalists would be Liverpool. Scotland arranged a friendly against France a few days later, what could be simpler? A dream triple header.

Roma cheated their way to the final, but what the heck, I arranged a match ticket through scouser pals and booked a flight to join them, London to Milan.
The week itself began with the annual Scotland England game and a 1-1 draw courtesy of a Mark McGhee header with a relatively large visiting support causing some headaches. The Saturday overnight train to London was full of cockney head cases, there was that atmosphere of nastiness, and perhaps they had felt that way when we travelled down to Wembley recently. Not the head cases of course, just ordinary train travellers. The head cases were just head cases, still are.
I had arranged to spend the day with a couple I had met on a previous trip, their names I cannot now remember, I have a memory however of us waiting for the arrival of the ‘Desert Fox’ , his nickname courtesy of getting lost in Egypt when we played in Israel a few years earlier. He never turned up, no one was surprised. I never met him, I wonder if he still a fellow traveller. Is he still lost?
A flight to Milan, a train to Rome and I stood with the Liverpool fans witnessing the penalties, the Grobbelaar wobbly legs and an atmosphere of menace I had not experienced before. If you are ever watching a clip of the penalties we were standing beside a gap between us normal fans and the lunatics baying at us from the other side of the Perspex barrier. I was with lads who could look after themselves, however such was the mayhem outside the stadium after the Liverpool victory we hired a taxi for a journey back to our coastal hotel that was scary & more.
The hazy bit, one of many, is how I managed to get hitch a lift in a Liverpool hockey player’s Ford Escort 1.6 Ghia to Marseilles? Phil if my memory serves me well, drove as far as Cannes, we went into a bar for a meal and ended up climbing up some balconies to stay the night with an English lad who had lost his front door key. Suspicious, I did not sleep a wink.
Arriving the next day in Marseilles we settled in with the Scots fans in a local bar and even then there were a number of well kent faces. Scotland were to be the warm up act, or patsies as some may have described us, for the forthcoming Euro championships and had a supremely talented team. Platini, Giresse, Tigana, et al.
Hey, we had Leighton Strachan ,Miller and Mcleish, European Super Cup winners , we were however in the end just cannon fodder, easy meat. The atmosphere was hostile as I remember however my memory was of a full crowd, officially the attendance stands at a paltry 24,641. We were not a massive draw, nothing changes. The score was 2-0, could have been more and Strachan interviewed recently admitted that the end of a hard season there was no enjoyment in chasing the best players in Europe around the pitch. France were a joy to watch and went on to win the tournament, wonderful and more.
I got the overnight train to Milan and flew back to London. Met some lads on the Glasgow train, they were missing the driver as his company car had blown up on the journey through France.
An adventure in the end, a trio of games and one thing I would change. One of the lads returning on the train had bought a centre stand ticket so he could watch the wonderful French players. I have since bought decent South stand tickets for the visit of the top nations. Hampden friendlies, the recent Denmark game, the Gibraltar game, I concur with a caller to a recent Off the Ball. The Hampden running track, for friendlies it should be extended to say half a mile.
As for La France, we would have revenge in 1989 courtesy of Mo Johnston, oh and that night in Paris.