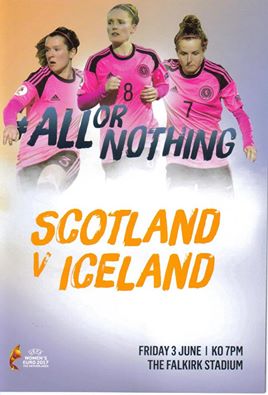 Financial constraints put paid to a trip to Metz for the France-Scotland game, however, much more affordable was a sortie to the Falkirk Stadium to see the Scotland Women’s team take on their Icelandic counterparts in a Euro Qualifier. The ticket was one of those SSC freebies, and call me a cheapskate if you will but I like the practice of receiving a free match programme and wish it was applied to the Men’s internationals – Germanyand Norway have adopted this practice from time to time. Anyway, I took my seat in the Main Stand, whipped out my Canon Powershot camera and tried hard not to look like a dirty old man who had travelled to the game on the Stuart Hall Supporters Bus.

The Scotland Women’s team had got off to a terrific start in their Euro Qualifiers winning five games out of five -3-0 away to Slovenia, 7-0 against Belarus at Fir Park, 4-1 away to Macedonia, 10-0 against Macedonia at the Paisley Stadium [Did St.Mirren manage as many goals across the entire season?] and 3-1 against Slovenia -again in Paisley. And then I turn up and our Women get humped, er, I mean, crash to a disappointing four-nil defeat. Just to add insult to injury, the award-winning Kim Little [116 caps and 46 goals – are you reading this Naismith, Fletcher etc?] missed a penalty in stoppage time at the end of the game.

The good news however is that Scotland are still in with a shout of reaching next year’s Finals in the Netherlands or at least making the play-offs. Also on the plus side is the thrill that I got from belting out ‘Flower of Scotland’ against the unusual backdrop of the flames emanating from the nearby Grangemouth Oil Refinery – it sure puts those Hampden pyrotechnics in the shade. Furthermore, I got to see a competitive Scotland international match played in the month of June – in an even-numbered year!