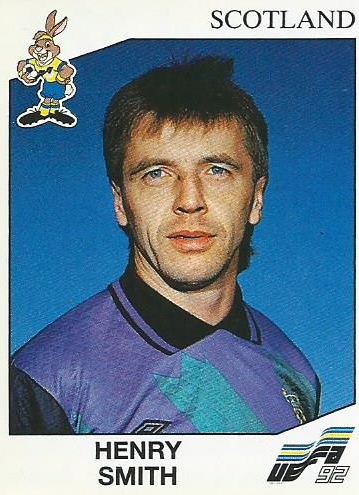 Always like to get hold of a sticker or card of a player who only had a handful of caps and so here is Hearts hero Henry Smith. Henry played just shy of 600 games for Hearts from 1981 to 1996. However, with Jim Leighton and Andy Goram available to Scotland at the time, his caps were limited.
In total Henry won 3 caps, the first coming in the heat of Riyadh, Saudi Arabia as Scotland played a friendly in February, 1988. Henry came on after half-time for Leighton. Scotland were trailing 1-0 at the time but would manage to grab two quick goals from Mo Johnston and John Collins before the Saudis equalised in the 71st minute and so the game ended 2-2.
After, the 1990 World Cup and his fall from grace in the Manchester United line-up, Jim Leighton disappeared from the Scotland scene for three years and Andy Goram was the undisputed Number one. With qualification for the 1992 European Championships in Sweden achieved the search was on for Goram’s understudy and Henry was given the nod for the first pre-tournament friendly in February,1992 against Northern Ireland at Hampden. Scotland won 1-0 thanks to an Ally McCoist goal early in the first half. A tour of North America ensued in May with Henry’s only real rival for the number two spot at the time, Gordon Marshall of Celtic, been given the first game against the U.S. in the Mile High Stadium in Denver. Scotland won 1-0 with Pat Nevin scoring the games’ only goal.
Henry was given the other match which was against Canada at the Varsity Stadium in Toronto. Scotland won 3-1 with Gary McAllister netting two including a penalty and Ally McCoist the other.
In 1992, the Euros only had eight teams and with this, the squads were only of 20, which meant only two goalkeepers. Andy Goram was of course, given the number one shirt but it was Henry who was given the second shirt and travelled to Sweden with the team.
Henry was never called upon to play during the tournament and indeed would never play again for Scotland with Jim Leighton coming back into the team the following year.
Still at least he got to be in a Major Finals sticker set, not a lot of Scotland can say that recently. Maybe just maybe though . ..