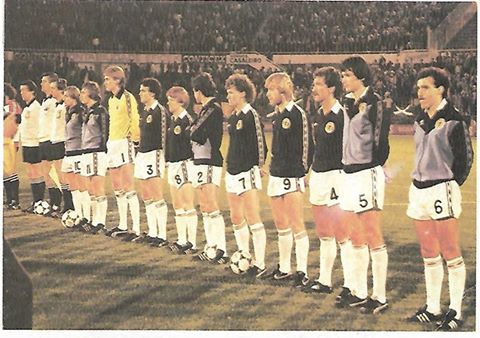 Another day, another football card. This time it’s from the Monty Gum company who released a set of postcard sized cards for the 1982 World Cup. There is apparently two Scotland ones; if you have the other could you post it please.
This one is taken from Scotland’s last World Cup Qualifier for ’82 in November ’81 at the Estadio Da Luz, Lisbon, Portugal. The line up is from left to right is: Asa Hartford (Captain), Paul Sturrock, Billy Thomson, Frank Gray, Gordon Strachan, Ray Stewart, Davie Provan, Stevie Archibald, Graeme Souness, Alan Hansen and Willie Miller.
Scotland lost 2-1 but had already qualified following a draw in Belfast the month before. Paul Sturrock scored for Scotland.