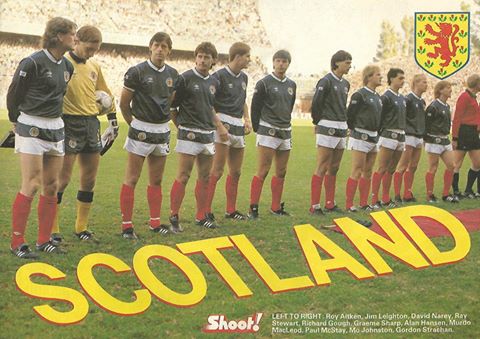 Here’s a team picture from 15th October,1986. The 1988 Euro campaign has to go down as one of our worst, starting off with a 0-0 against Bulgaria at home, we followed it up with the same score in this game against the Republic of Ireland at Lansdowne Road. The Republic of Ireland would beat us at Hampden in the February of 1987 and then Belgium would stuff us once more in Brussels. Better times were ahead though as we did manage to beat Belgium 2-0 at Hampden in October 87. I will repeat that “we did manage to beat Belgium 2-0 at Hampden” since it sounds so good. The following month, Gary Mackay wrote his way into Irish history scoring the winner in Sofia, Bulgaria to give the Irish qualification as group winners.
This was Andy Roxburgh’s first campaign as manager and it ended in embarrassment as Scotland drew 0-0 away to Luxembourg in the final game.
Still better times were ahead as Qualifying for Italia ’90 was just around the corner.