I know some of us are lying awake at night in anticipation of Scotland perhaps reaching a major finals and being able to travel to France and follow our team for a fortnight and hopefully more. However, the really sad among us are dreaming of Panini stickers albums and other cards.

Every major tournament has had its sticker album since the 70’s more or less but in the last ten years or so there are Panini Adrenalyn Cards and Match Attax cards. Come summer 2016 there will be plethora of cards to collect and if we’re lucky Scottish players among them.

Can’t wait . . . well there is a set out there to collect now. The only problem is, it’s only available in Serbia. It’s been released by a company called Schoolshop and is a rather cheaply made sprawling set of 648 stickers. It has every competing nation in it including Luxembourg, Liechtenstein and Gibraltar. However, we Scots are among the minnows with a measly 8 stickers, whilst our group opponents Poland, Germany and Ireland all have 16. It comes down to seedings; all those in Pots 1,2 and 3 have 16, whilst any below that have 8.

It is quite a cheap set and I have only bought three Scottish players on ebay and there’s even a mistake among them. Below is the List of Scottish players and finally do you know of anyone going to Serbia soon? 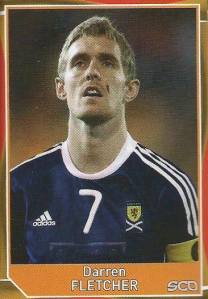 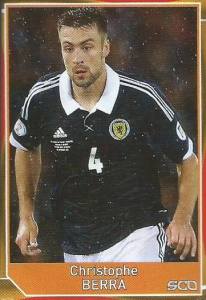