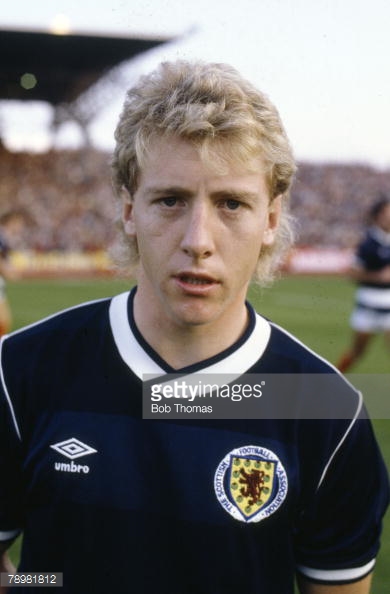 Frank will be 56 on November 22nd. It’s hard to think about Frank and not conjure images of Jonathan Watson doing a parody of him on Only An Excuse. Even though it stopped being remotely funny about five years ago, it and the other issues in his life i.e. addiction, drug busts and bankruptcy have all overshadowed his ability as a football player.

Like some of the best people Frank grew up in the Milton area of Glasgow and started out his football career at St. Mirren in 1980. Frank played for the Scotland Under 21 team three times during this period and indeed scored the only goal in a European Championship match away to Italy in Catania, playing alongside the likes of Jim Bett, Jim Leighton, Steve Nicol and Gary Gillespie among others.

Frank moved to West Ham in the summer of 1985 and season 1985-86 was to be a golden one for him and the Hammers with one important moment for Scotland. Frank would end that season scoring 26 goals in the top English division, only being bettered by Gary Lineker.

With Frank scoring goals for fun; Alex Ferguson chose him to start, partnering Kenny Dalglish in Scotland’s vital play off against Australia in November, 1985. On a rather nervy night Davie Cooper finally put Scotland one up in the 57th minute with Frank adding a second, a few minutes later. Frank’s goal gave Scotland the breathing space for the return leg in Melbourne a fortnight later.

Frank started up front with Chelsea’s David Speedie in Australia but neither side were to score which meant Scotland were on their way to Mexico for the 1986 World Cup.

Frank would probably been frustrated by the following months, although his goalscoring from continued Alex Ferguson chose others in front of him for warm up friendlies and the 1986 Home Internationals with Graeme Sharp, Charlie Nicholas, Paul Sturrock and Ally McCoist all given their chance.

Ferguson’s time in charge of Scotland was not a happy one as he struggled with being the manager of Aberdeen on one hand and the manager of the National side. There would be quite a few players aggrieved at not being picked for the Finals like Alan Hansen, Mo Johnston; some like McAvennie would be angered at not getting to start a game in Mexico.

Ferguson chose Charlie Nicholas and Paul Sturrock as the front pairing for the opening game against Denmark, which Scotland lost one nil. McAvennie would come on, in the 61st minute for Sturrock as Scotland began to chase the game, having conceded a few minutes before. Seeking goals in our next game Ferguson brought in Stevie Archibald to start his first Scotland game in 16 months and again ignored McAvennie’s claims to start the game. Frank would again be brought on, bizarrely in the 61st minute again, to try and help Scotland retrieve a result after going 2-1 down to West Germany. This would also be Archibald’s last game for Scotland.

For the final and crucial group match against Uruguay, McAvennie was dropped completely by Fergie. Looking back, Frank suspects it more was to do with off field incidents, particularly in criticizing Fergie for failing to pick him that led to this sad state of affairs. Graeme Sharp and Paul Sturrock would start the final game with Charlie Nicholas making a subs appearance; all failing to make any impact with Scotland not being able to find the net against Uruguay who were reduced to ten men in the first few minutes of the game.

As for Frank, his golden season ended in disappointment and although he would continue to score goals for the Hammers with diminishing returns, he headed up to Celtic in October, 1987. One more Scotland outing awaited him as he would picked to start for a friendly In Riyadh, Saudi Arabia by Andy Roxburgh. Scotland drew two each with Mo Johnston and John Collins scoring the goals but for McAvennie that was it, the emergence of Ally McCoist and Mo Johnston once more getting a regular game, meant there was no place for Frank in Roxburgh’s plans.

Happy Birthday Frank and who knows what might have happened had you been given a starting place in that last game in Mexico.